Walking tall in our ANZACs’ shoes 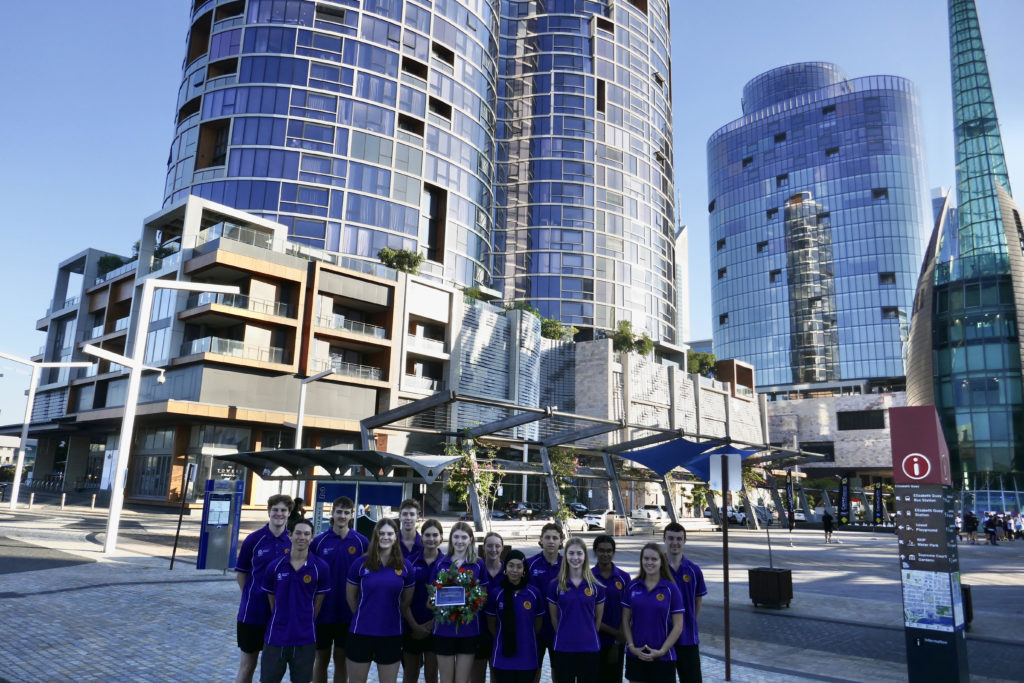 Year 10 Isabella Hulm holds a wreath with fellow students on the Premier’s Anzac Student Tour, before a trip to Campbell Barracks.

St Norbert College student Isabella Hulm has travelled 6000km around WA over the past few days – by plane, bus, ferry and even bicycle.

As the only Catholic school representative on the 2021 Premier’s Anzac Student Tour, Isabella has immersed herself in WA’s military past and will spend Anzac Day laying a wreath at the Dawn Service at the Desert Mounted Corps Memorial on Mount Clarence in Albany. Following a gunfire breakfast she and fellow tour participants will march in the Anzac Day parade from the Albany Town Hall to the Anzac Peace Park, laying another wreath.

“This is an especially poignant moment for me as I wrote about the Albany Dawn Service in my application essay, and it will be the first time I have ever been to one,” Isabella said.

Fourteen students from 12 secondary schools have been travelling around the State since April 16 in commemoration of the Anzac legacy. The historical education program focuses on the Anzac legacy in the context of Western Australia’s pastoral heritage, nation-building between the wars, and defence of the home-front during World War II. The group has visited historical sites including the flying boat wrecks in Broome, the Oliver Hill battery and tunnels on Rottnest Island, the Special Air Service Regiment Museum at Campbell Barracks and the State Library of Western Australia to explore the military collection items.

“It would be extremely difficult to select one specific highlight out of this amazing experience, but I have to say that the passionate people I meet have definitely been one thing that has stood out for me,’’ Isabella said.

“The people I meet are so devoted to the sharing of such vital stories and parts of history that ensure the Anzac legacy lives on. It is through their time and effort that we are able to learn and pass on such valuable information that would otherwise remain forgotten or be brushed over. They allow us this opportunity by continuing to educate and share this legacy with the younger generations. There are fewer and fewer people nowadays that realise the importance of such actions, and without their devotion and application, we would never be able to recognise the true value of historical events that have shaped so many people and our nation. This is something that always has and will continue to stand out and inspire me.”

On Thursday, students took a ferry to Rottnest island where they were greeted by Noongar guide Walter McGuire who welcomed the group to Wadjemup and told stories about the island’s history and sang.

“Walter provided a perspective that was so insightful and unique,’’ Isabella said. “As an Indigenous Australian, he highlighted pieces of information, familial ties and the mistreatment of Indigenous Australian’s, relating it with his own experiences. He provided not only an in-depth overview of the colonisation and early uses of Rottnest island, but focused and highlighted the Indigenous culture and people that were used and thoroughly mistreated. Walter was so passionate when describing the events that affected his distant family, that continue to affect him today.’’

A volunteer guide also took students to the Oliver Hill guns and tunnels, built as components of Fortress Fremantle.

“It is largely unknown that Rottnest was prepared and built a gun battery to assist and protect Fremantle Harbour, which was extremely valuable at the time, from enemy attacks,’’ Isabella said. “Fortunately, the battery was never used in warfare, but the process of building and deploying soldiers impacted Rottnest Island in a time of such fear as a whole. It was such a unique and amazing opportunity to be able to go into the tunnels underneath the battery, and see firsthand how the soldiers and guns would have worked had they been faced with the enemy on the home front shores. It was fascinating to see how Rottnest was included in the protection of Fortress Fremantle; and to see just how much military and strategic significance that the island and gun battery held. In a time of such fear, I cannot imagine what the people of Rottnest and Perth were feeling and imagining, but the island itself was prepared and soldiers were actively training and preparing, almost dreading the day that Rottnest would see action.

“I have no words for how much I enjoyed Rottnest and how it aided in my understanding of Western Australia’s legacy and involvement in the global conflicts, but also how interesting it is to learn about the history; and be able to link that to our journey – Kununurra, Broome and Perth; all of which have a deep connection with the land, and use of the land which affected their history, the way in which the land was utilised, people were treated and their subsequent involvements in global conflicts.’’

The tour finishes on 26 April, just in time for Isabella to return to St Norbert College for its own planned Anzac commemorations. 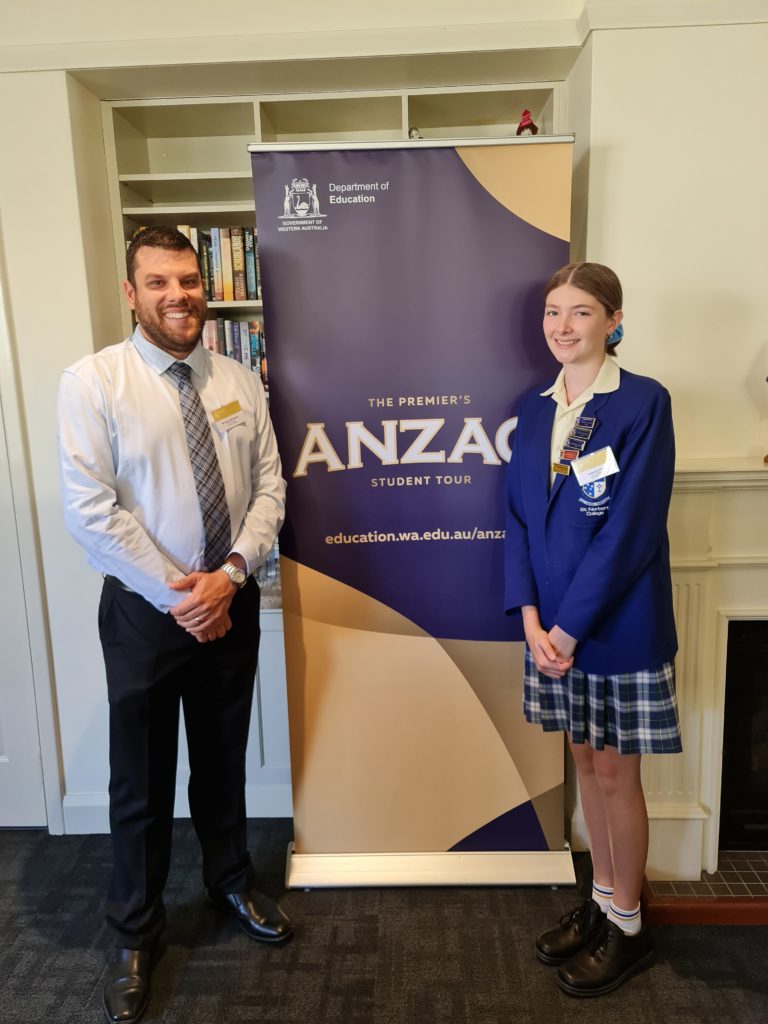 Isabella with Mr McGoorty when she was chosen for the PAST tour.

Pictured with Principal Simon Harvey and HASS teacher Mr McGoorty, Isabella is the only student for a Catholic school chosen to represent the State. 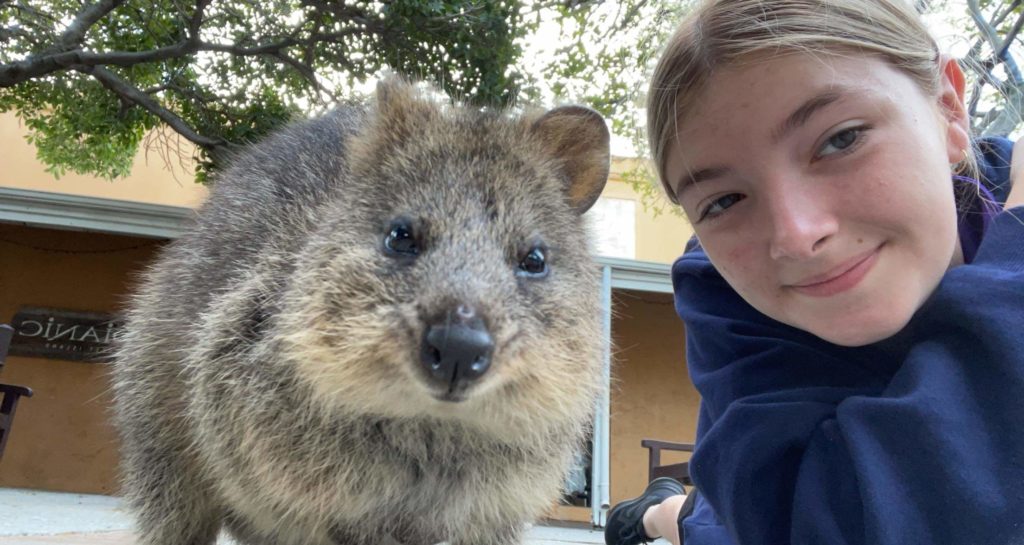