Despite not being able to travel overseas or interstate for the 2020 Premier’s Anzac Student Tour, Year 9 Isabella Hulm made the most of Anzac Day.
Three days before the national commemoration on April 25, Isabella featured on the front page of the Canning Examiner, explaining how the past six weeks had consisted of webinars and online connections with tour organisers and the nine fellow students chosen from secondary schools across WA.


On Anzac Day, Isabella’s report on the life of John Gilmour, a former prisoner of war, was also published online – you can read ‘Favourite sons’ here

Isabella also took part in a webinar video explaining what Anzac Day means to her.

The Premier’s Anzac Student Tour would have travelled to Darwin and Singapore from 16-26 April. The study tour conducts historical inquiry into Australia’s military involvement in the Asia region during World War II. The tour had plans to visit important historical sites, before attending Anzac Day commemorations at Kranji War Memorial where 4461 Commonwealth casualties of World War II are buried.

The experience of a lifetime has formally begun for St Norbert College Year 9 Isabella Hulm, one of 10 West Australian students chosen to travel to Darwin and Canberra as part of the Premier’s ANZAC Student Tour in 2020.

This month the students met to immerse themselves in war history during a three-day pre-tour briefing.

At the War Widows Guild in Menora, Isabella met fellow participants from various schools as well as the Hon Sue Ellery, Minister for Education and Training, and Ms Lisa Rodgers, the Director General of Education in WA.

Our proud representative was accompanied by Mr McGoorty, her Year 8 and Humanities Extension teacher (and former SNC student!) and Deputy Principal Mr Hawke. Also in attendance were members of the 2/4th Machine Gun Battalion whose footsteps the students will be following when they visit Darwin in April. Students also heard a moving speech from one of the members of the 2/4th Machine Gun Battalion Association who detailed the conditions the soldiers faced as they were held as Prisoners of War by the Japanese during 1942. He spoke of how the soldiers showed courage, bravery and mateship despite the appalling conditions they were in. 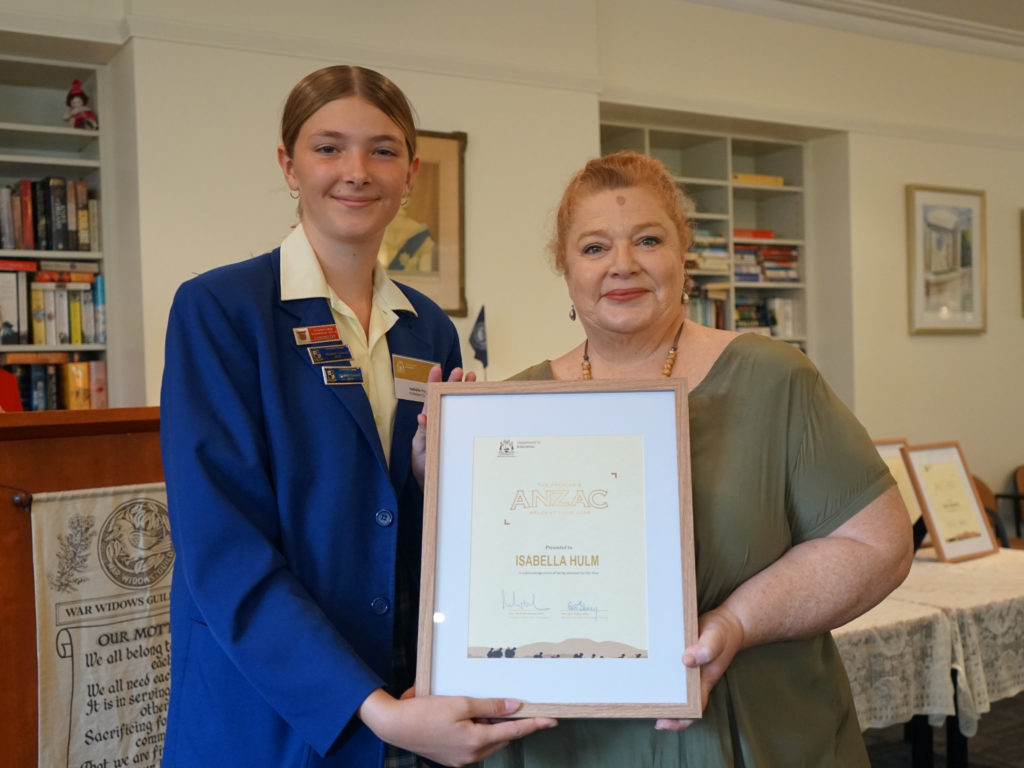 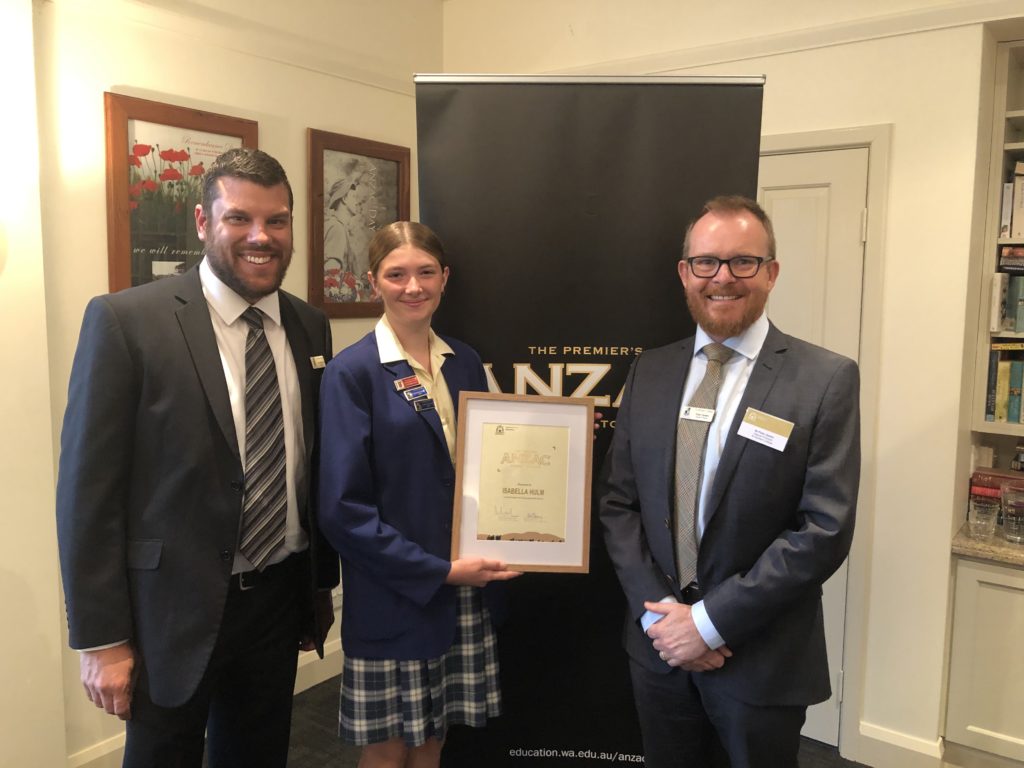 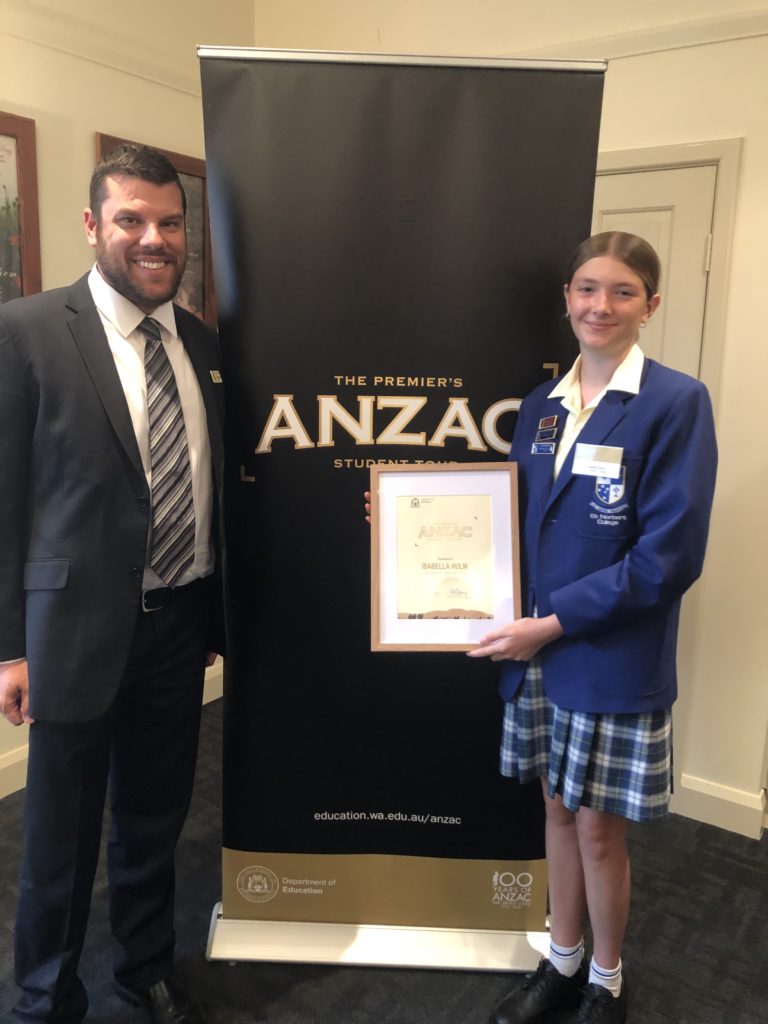 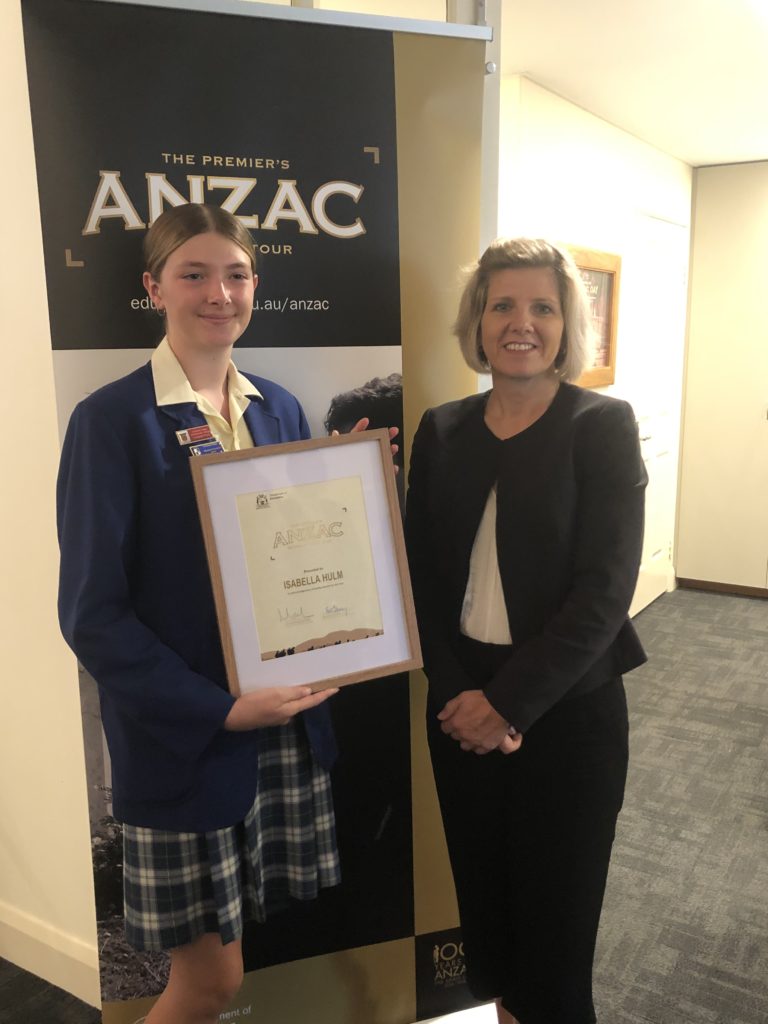 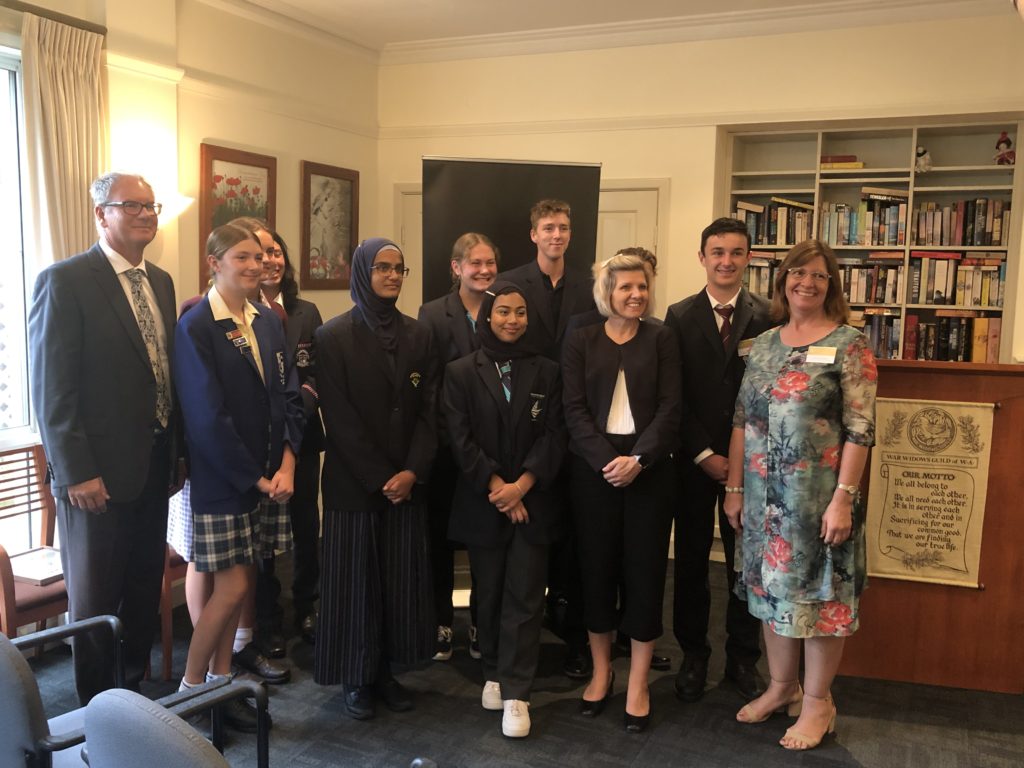 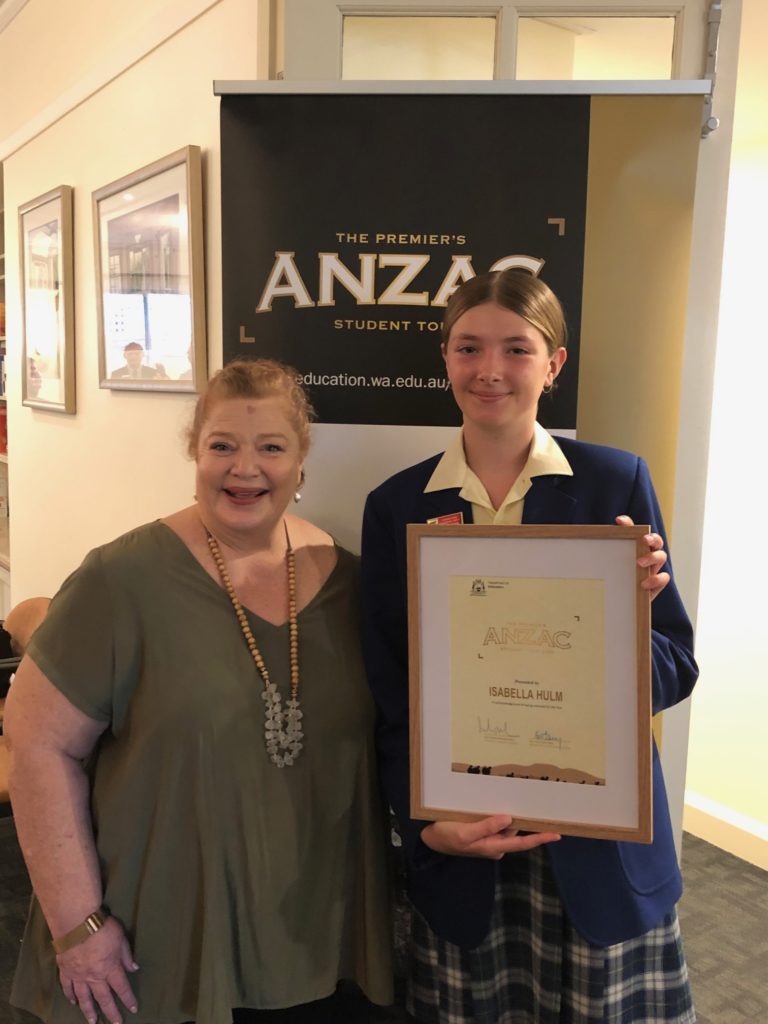 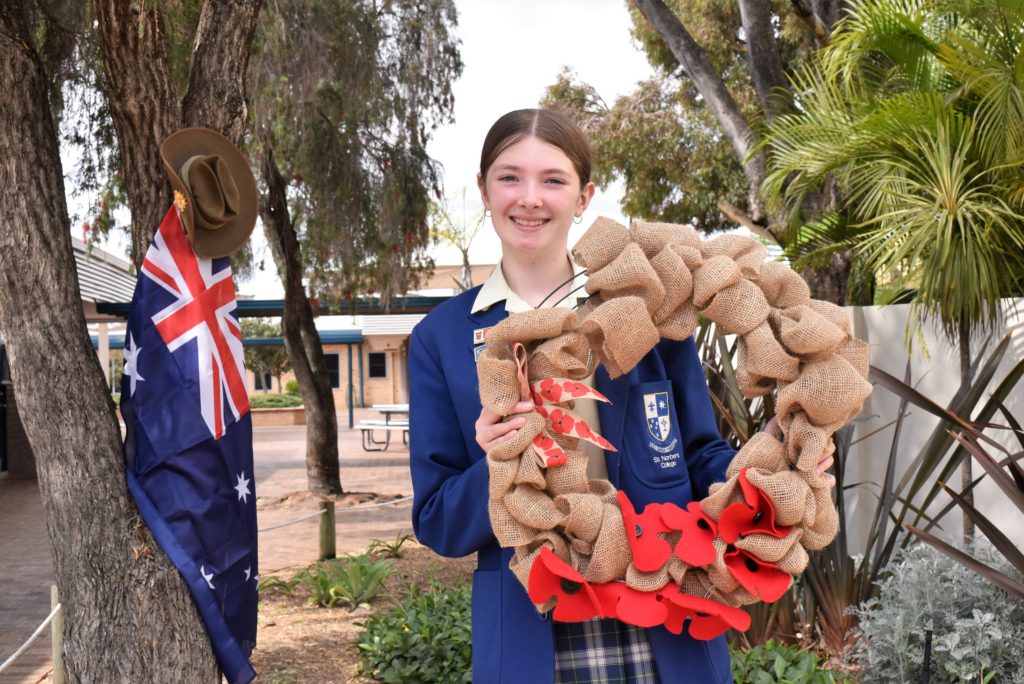 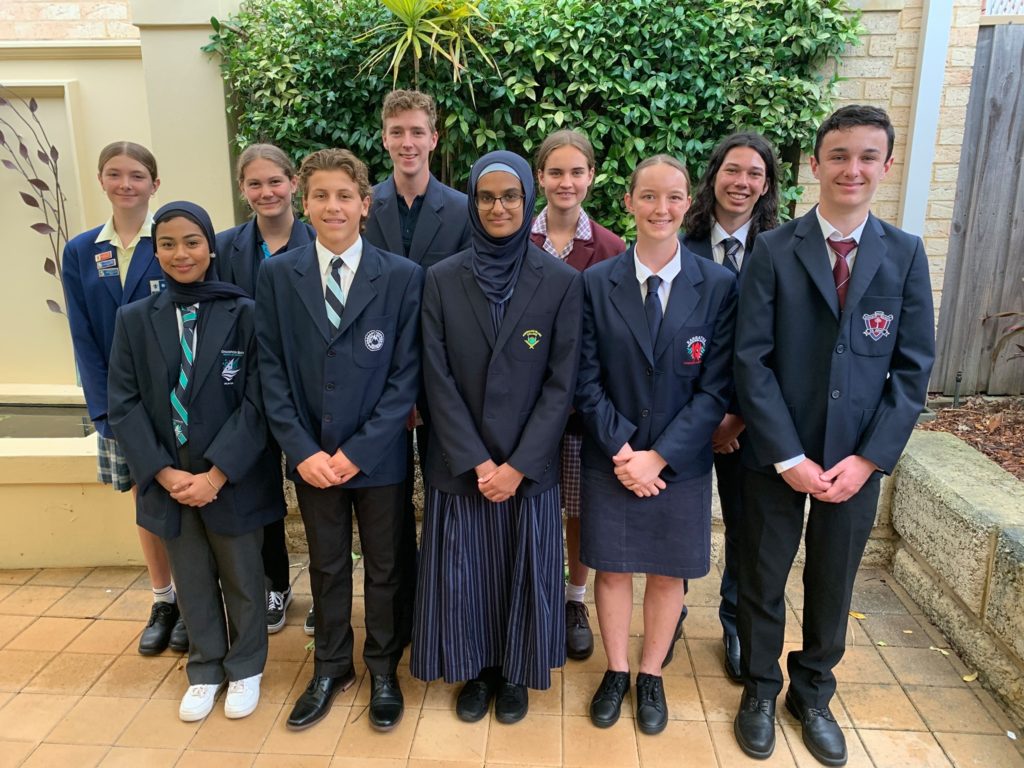 The tour was originally meant to include Singapore, but as all international school trips have been cancelled due to the Coronavirus, the students are now scheduled to incorporate a visit to Canberra.

We look forward to following Isabella’s progress and wish all participates the best.