Meet The Cast of Cinderella 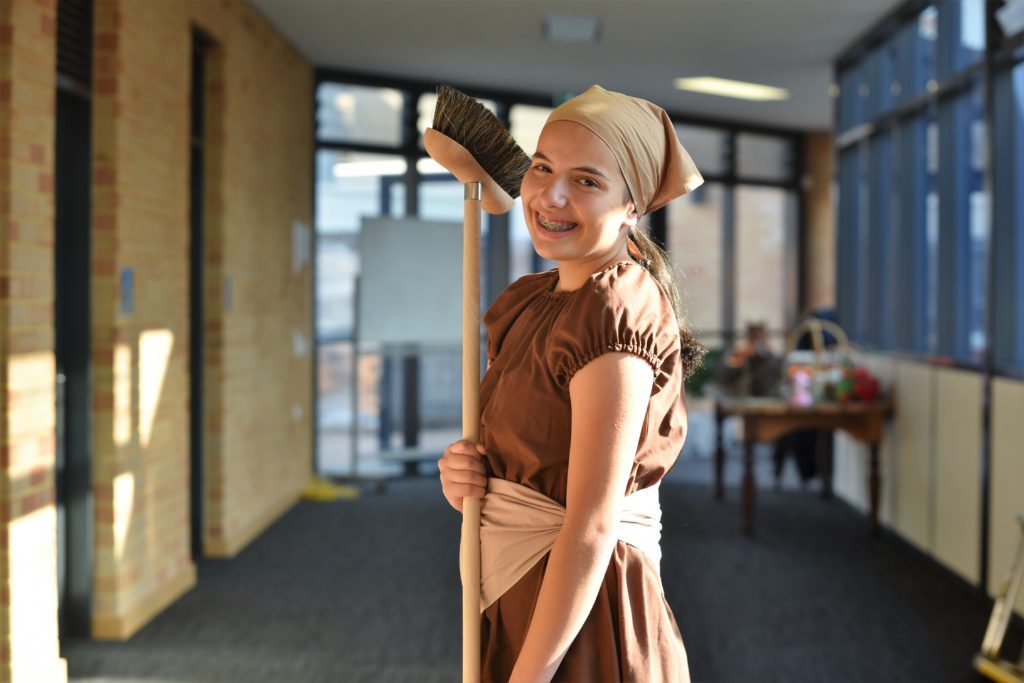 As opening night draws near, four cast members reveal their favourite moments so far and what they are looking forward to about opening night. (Ticket details below).

Isabella Giuffre – who plays the lead role of Cinderella – is right at home in the Xanten Theatre. A member of Xanten House, Isabella is having a ball developing her role as the poor skullery maid who becomes belle of the ball.

What are you enjoying most about rehearsals?

Performing with the cast and rehearsing scenes with singing and dancing as well as acting. I also love seeing other scenes that I’m not involved in as our cast is amazing.

What is the greatest challenge for you in your role?

To stay super sweet as my character. My singing voice and speaking voice are also very different to each other so that creates a challenge as well.

How would you describe the character you are playing?

Cinderella is an incredibly sweet, kind and caring character. She loves herself and enjoys creating fantasies. I love playing her as she performs amazing songs and is a great role model.

What is your favourite scene so far?

I don’t have one favourite scene but so far the “Transformation” scene, the songs with the stepmother and stepsisters, and Cinderella’s solo with the animals are my favourite scenes. These are the most fun and exciting in my eyes.

What are you most looking forward to about opening night?

Finally performing to the audience so they can see how hard we’ve worked. I’m also looking forward to performing with the best cast and seeing everyone shine on stage.

Out of 10, how good is the pumpkin coach?

Definitely a 10, over a 10 if I could. The pumpkin coach is absolutely magnificent and deserves a lot of credit. 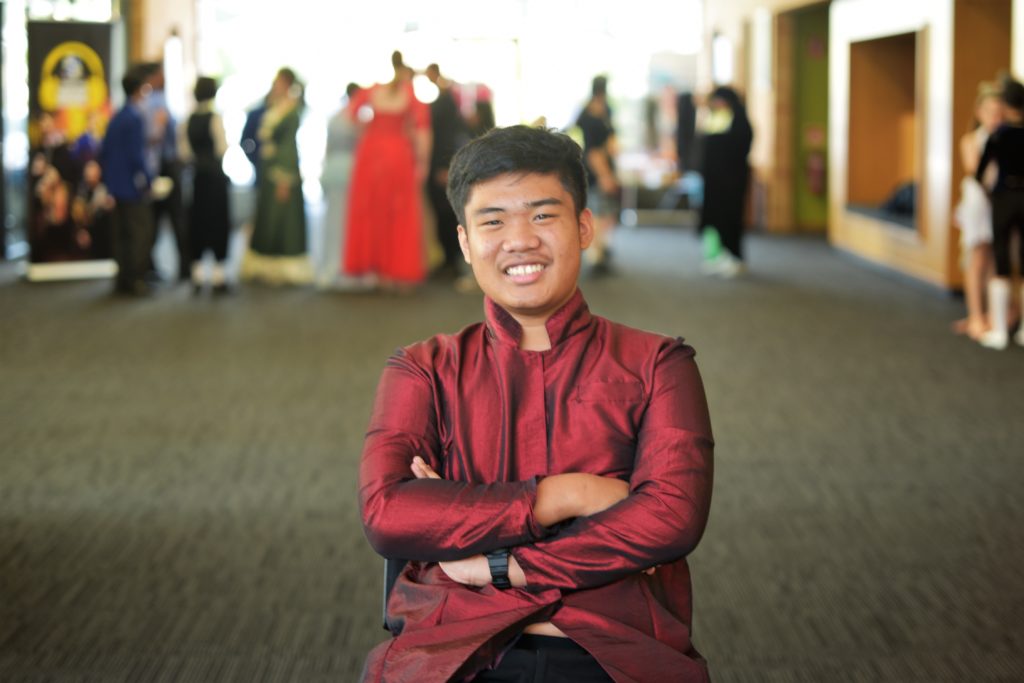 It’s not every day one morphs into a royal prince, explains Year 10 cast member Aeldric Varilla, of Tongerlo House.

What are you enjoying most about rehearsals?
👑The joy of being able to work with new and amazing people, especially Miss Hilton who just brings the laughs to the table (even if it means getting told off by her), while still being able to have fun trying to adapt to the roles of our characters.

What is the greatest challenge for you in your role?
👑Getting in the zone of being a royal prince, instead of being a normal, casual person.

How would you describe the character you are playing?
👑Christopher is a kind, sweet and humble person who is always willing to help someone out.

What is your favourite scene so far?
👑The “Throne Room” scene in which Christopher interrupts his mother and father’s conversation. The scene overall is really funny.

What are you most looking forward to about opening night?
👑Just performing my best, going with the flow and having a blast acting as the prince. 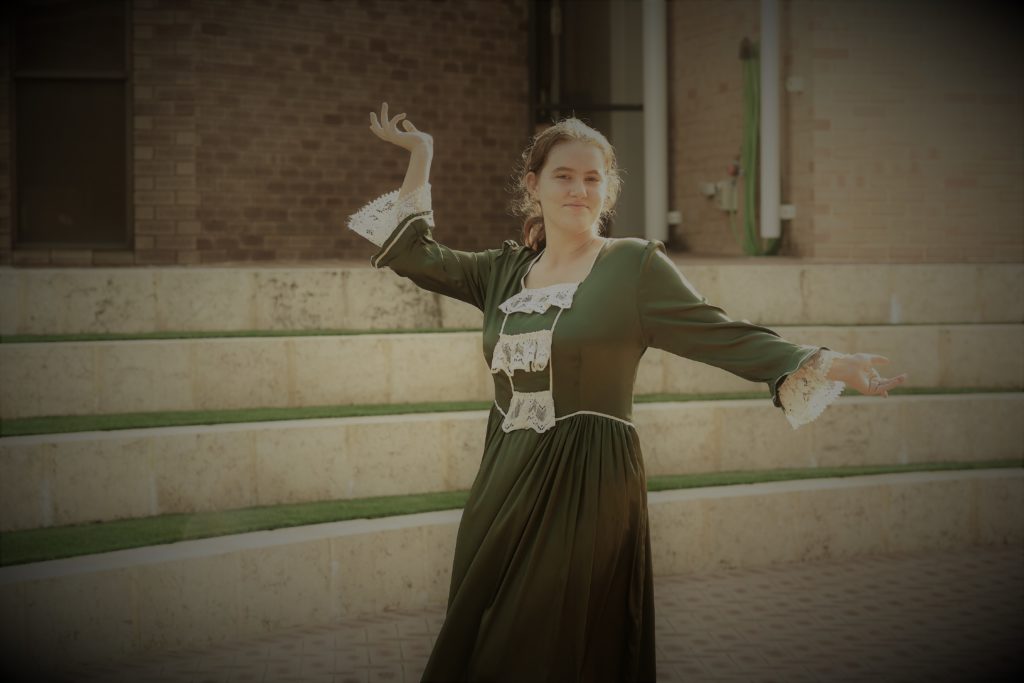 Whatever you do, don’t cross the Wicked Stepmother . . . Mary Carter, of Magdeburg House, says playing the villain is so much fun!

What are you enjoying most about rehearsals?
🧙‍♀️Being alongside many of my close friends. It’s also a really great process, as we add to scenes, work on some truly iconic characters and get to work on an amazing set. Our cast has become close through rehearsals, even forming new friendships which makes the rehearsal period even more enjoyable.

What is the greatest challenge for you in your role?
🧙‍♀️Knowing when to change between being funny and just being cruel. I’m hoping there will be an equal amount of time when the audience loves the character and hates the character.

How would you describe the character you are playing?
🧙‍♀️Cinderella’s stepmother is very desperate to marry off her not-so-clever daughters, more for her own benefit than for theirs. Her daughters have a talent for frustrating her in every scene; something she takes out on Cinderella majority of the time. She can be very harsh and very determined, it’s a situation where you’re always waiting for her to snap.

What is your favourite scene so far?
🧙‍♀️All the scenes are amazing to do, but my favourite is when stepfamily leaves for the ball. It gives me a chance to play the stepmother as really cruel (more so than usual). It’s a moment where I think everyone will really hate the stepmother and I’m actually excited for it. Playing the villain is always fun.

Out of 10, how good is the pumpkin coach?
🧙‍♀️Definitely 11/10. It’s so cool. I got to watch the scene with the Pumpkin Coach last week at rehearsals and seeing made me even more thrilled to be a part of this show. It’s going to blow the audience away. 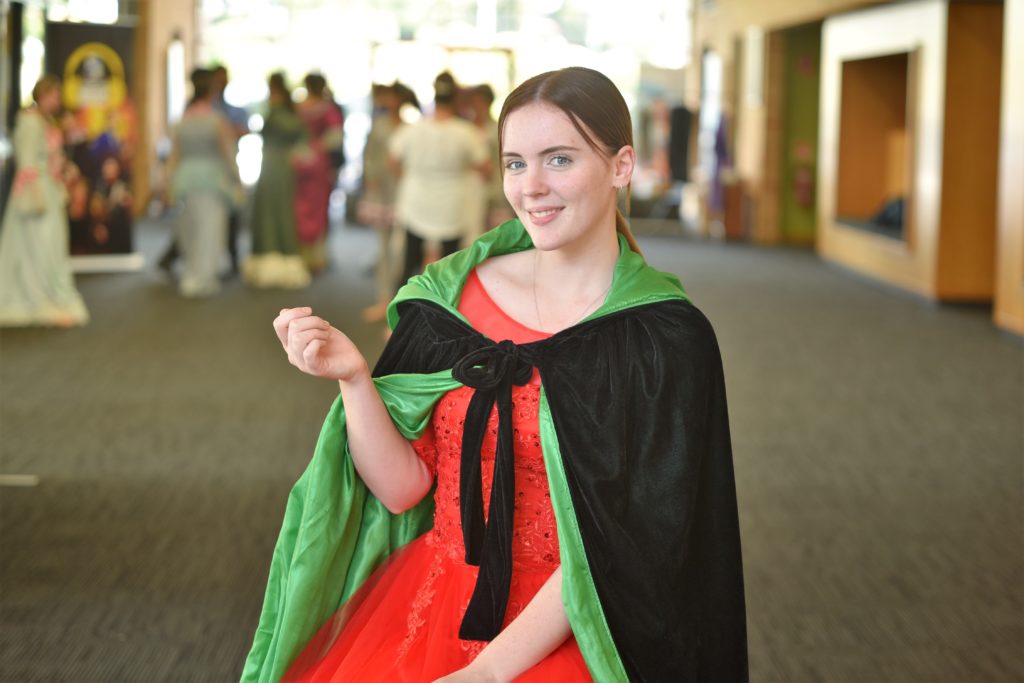 What are you enjoying most about rehearsals?
🧙‍♀️I love the bond our amazing cast has. Each person wants everyone to succeed and do amazingly well in their role no matter how large or small it may be. This is extremely motivating and has led to the formation of close bonds between the cast. The chemistry between all of us is evident on stage and it makes this show and the rehearsals 10 times better.

What is the greatest challenge for you in your role?
🧙‍♀️The greatest challenge I find when trying to embody the spirit of the fairy godmother combining sassy with sweet and blending these traits to seem magical. When I find the perfect balance my character truly comes alive.

How would you describe the character you are playing?
🧙‍♀️Slightly sassy, nurturing, ethereal and truly loveable. The fairy godmother was always my favourite to watch in Cinderella growing up so it is truly a pleasure to get to be her in this amazing show.

What is your favourite scene so far?
🧙‍♀️My favourite scene by far has to be the scene with the king and queen where they sing the song boys and girls. This song is so sweet and charming and my heart melts every time I hear it.

What are you most looking forward to about opening night?
🧙‍♀️The adrenaline rush from being on stage. it is a high like no other and makes the experience extremely fun. I have to admit, I am also very excited for the stunning costumes which Mrs Freind has poured her heart and soul into, they are breathtaking and add so much to the show, I am in love with my costume.

Out of 10, how good is the pumpkin coach?
🧙‍♀️There is not a number large enough to describe how wonderfully majestic and beautiful the pumpkin coach is. Mr Lawson is truly amazing and we owe this extraordinary piece of set entirely to him. Without Mr Lawson and our amazing set the play could never be as it is.

Cinderella: The Enchanted Edition is being performed for the College community four times at the Xanten Theatre – on 5, 7 & 8 May. The show begins at 7pm each evening, with an added matinee performance on the Saturday. Tickets are $15 through www.trybooking.com/BPCLK

🎭Rodgers & Hammerstein’s
CINDERELLA
Music by Richard Rodgers
Book and Lyrics by Oscar Hammerstein II
Adapted for the stage by Tom Briggs
From the teleplay by Robert L. Freedman
“Cinderella is presented by permission of ORIGIN Theatrical on behalf of the R&H Theatricals: www.rnh.com